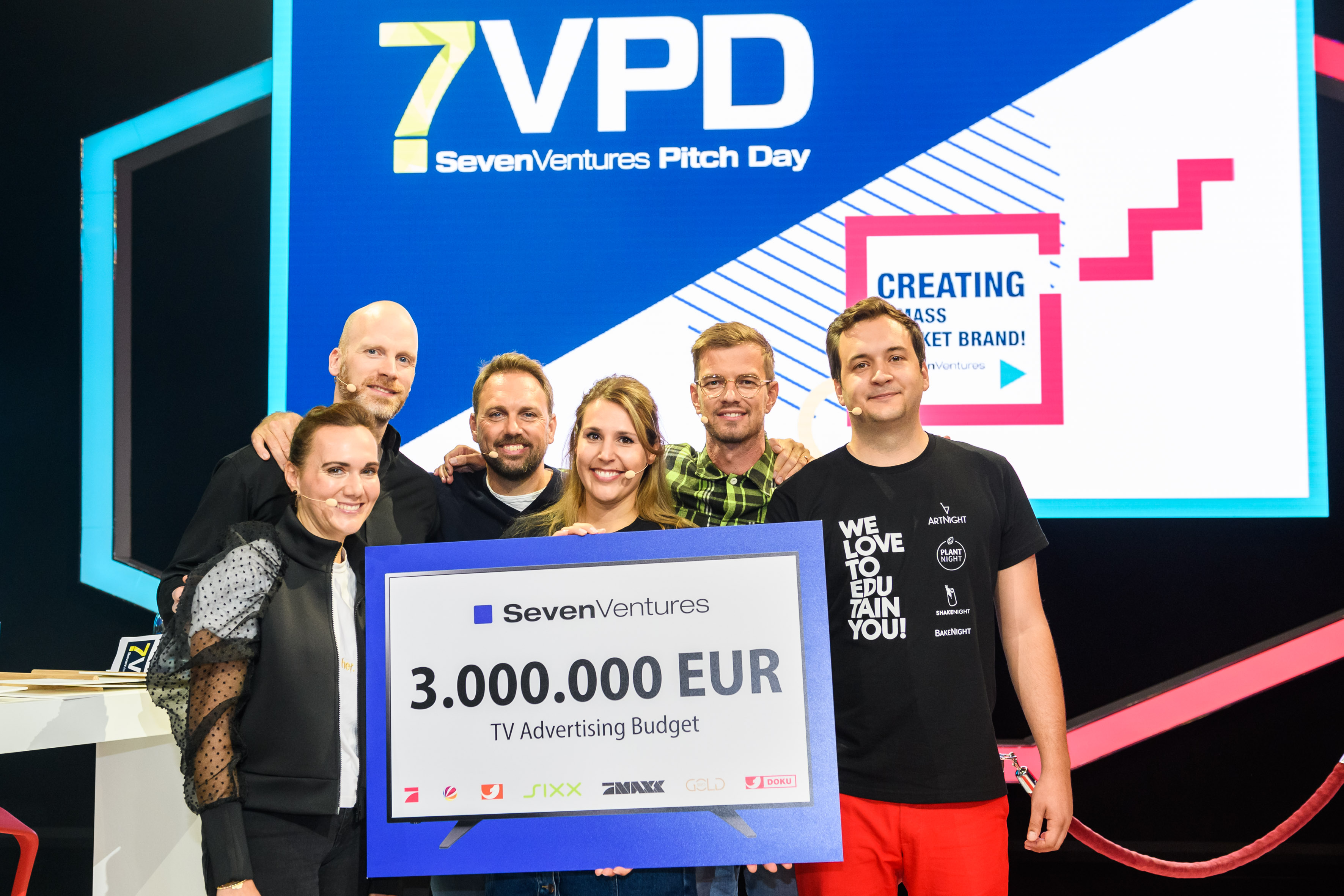 Cologne, September 12th 2019 – ArtNight is the winner of this year’s SevenVentures Pitch Day. ArtNight, a start-up focused on bringing people together offline through edutainment workshops, faced tough competition across two rounds to secure a lucrative media package valued at €3 million. The renowned pitch competition for founders and start-ups, hosted by SevenVentures the media investment arm of the ProSiebenSat.1 Group, is now in its ninth year. The renowned prize for start-ups has helped multiple organisations break onto the mass market, including Selfapy, Hafervoll, Withings and GetYourGuide.

As this year’s winner, ArtNight will receive a media package from the ProSiebenSat.1 Group, which includes a multimillion Euro media package from the ProSiebenSat.1 Group and €30,000 for the creation of a TV spot. In addition ArtNight will begin a 4-month mentoring programme with Flaconi, one of Germany’s leading online beauty stores.

Kathrin Nusser, CFO at Flaconi, “I was fascinated by ArtNight and their idea for offline, entertaining events and for its relevance in today’s digital society. I am looking forward to working with the team at ArtNight across the next four months and to support, challenge and accelerate their business moving forward with the Flaconi mentoring programme.

Aimie-Sarah Carstensen and David Neisinger Co-Founders of ArtNight, “We are thrilled and thankful! This opportunity will enable us to bring more people together offline. With our edutainment experiences ArtNight, ShakeNight, BakeNight and PlantNight we are now able to reach the mass market faster.”

SevenVentures CEO Dr. Jens Pippig is delighted to be working together with ArtNight: “ArtNight encompasses everything that we were looking for in a start-up this year: an innovative product and a scalable business model. I am certain that we can give ArtNight the boost the company now needs.”

Jury member Joko Winterscheidt was convinced by ArtNight’s business idea, “ArtNight is one of the few platforms that focuses on offline social interaction – simply being around other people. Simple idea, brilliantly executed”

Decision live on the DMEXCO stage

A further three start-ups took to the stage to pitch their business idea before start-up investor and presenter Joko Winterscheidt, Flaconi CFO Kathrin Nusser and SevenVentures CEO Dr. Jens Pippig and a live audience. CHOOOSE stands for the streamlining of climate action, encouraging individuals and organisations to reduce their environmental footprints. Jodel is an app that connects individuals through the sharing and rating of anonymous posts. rebike1 aims to be the most successful, cross-brand platform for second-hand premium E-Bikes.

In the semi-final rounds two start-ups went head-to-head to secure a place in the final. In the first round CHOOOSE competed against Jodel, whilst the second round saw ArtNight and rebike1 battle for the final spot. The jury delivered their verdict, naming CHOOOSE and ArtNight as this year’s finalists. In the grand finale, ArtNight was able to win over the jury with their innovative business idea and convincing presentation, securing the win over the competition.

SevenVentures is the leading global TV media investor with core markets in Europe, USA and Asia. As the investment arm of the ProSiebenSat.1 Group, SevenVentures is the ideal partner for high-growth B2C companies, particularly in the consumer goods, retail and services industries, who have the potential to achieve sustainable success by launching TV advertising campaigns. Zalando is the perfect example of how companies can take advantage of this to become market leaders or popular brands. Our current customer portfolio includes ABOUT YOU, Casper and tink. SevenVentures also supports enterprises seeking international growth with media power, capital and all other services of the ProSiebenSat.1 Group. In cooperation with the Group network, comprised of leading European media companies, we always find the right growth strategy.

ArtNight is a platform for creativity. Under the guidance of talented, local artists, workshop attendees are brought together in groups of around 25 to create works of art on easels in a social, fun environment.

CHOOOSE stands for the streamlining of climate action. With CHOOOSE, companies and individuals can take instant climate action by offsetting their carbon footprint through funding CO2-reducing projects.

Jodel is an app that connects individuals through the sharing and rating of anonymous posts. These posts encourage people to interact locally and meaningfully.

rebike1 is a start-up operating in the eMobility sector. The company aims to be the most successful, cross-brand platform for second-hand premium E-Bikes and provide customers with attractive subscription and rental options.